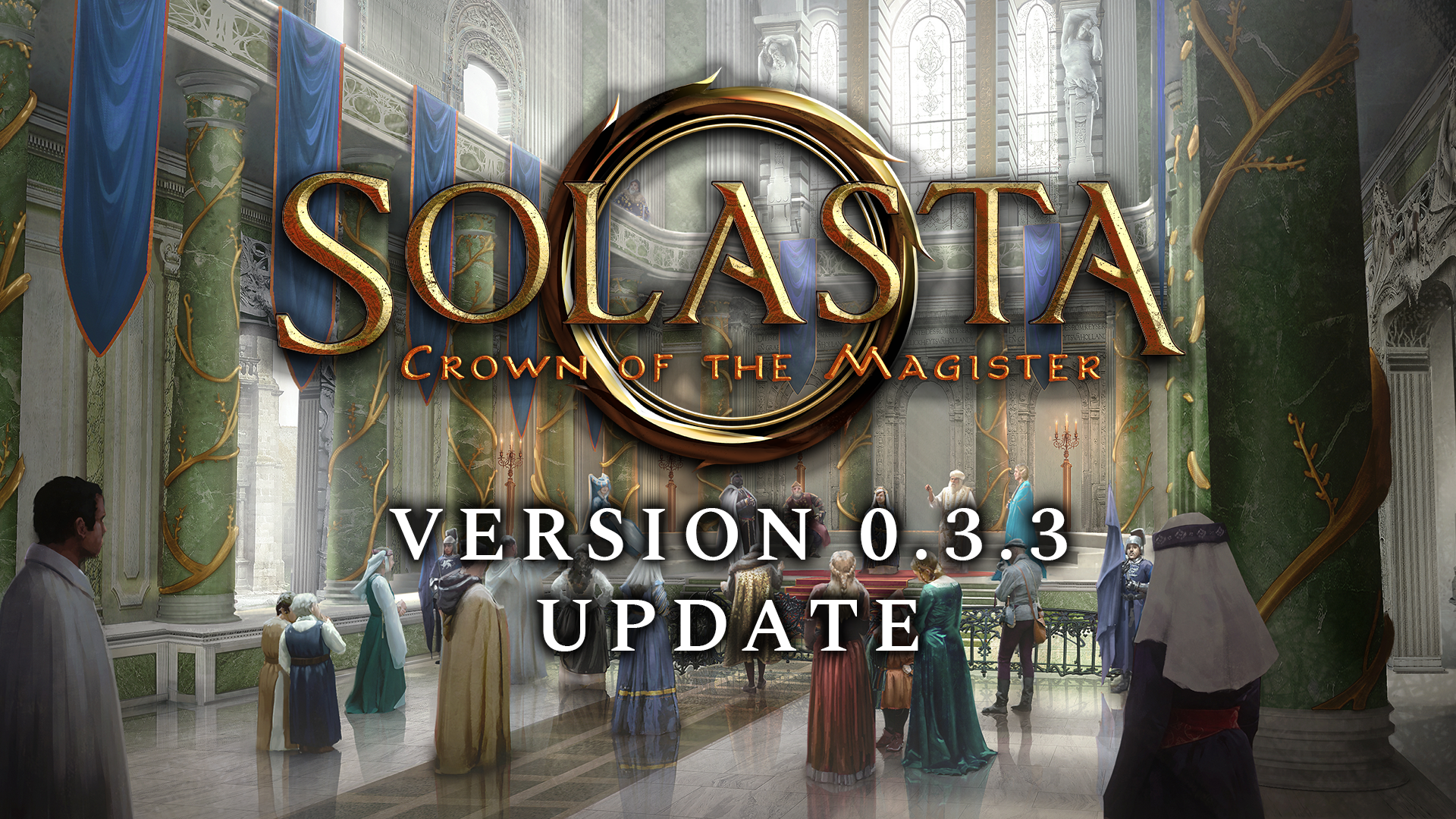 It's been one week since our Early Access launch and we've been hard at work to bring you a whole bunch of improvements!

Important: If you are running into infinite loading screens, make sure to verify your games files! 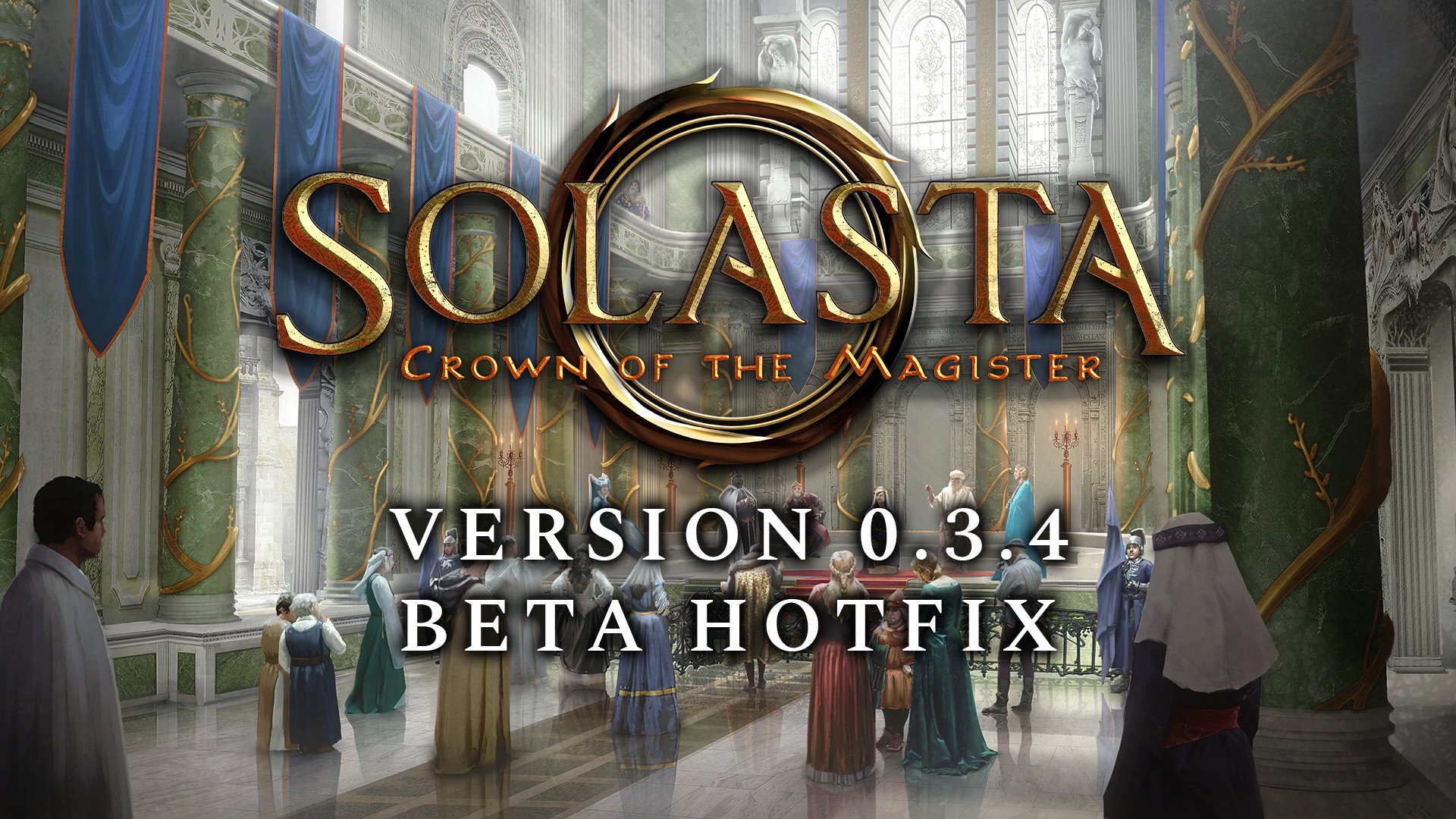 We're pushing a small Hotfix today for people who're still running into game-breaking bugs during their run. As we want to make sure this small patch does not cause more issues than it fixes (and since it literally only contains bug fixes), we've decided to upload it to a BETA branch on Steam.

What does that mean?

How do I do that? 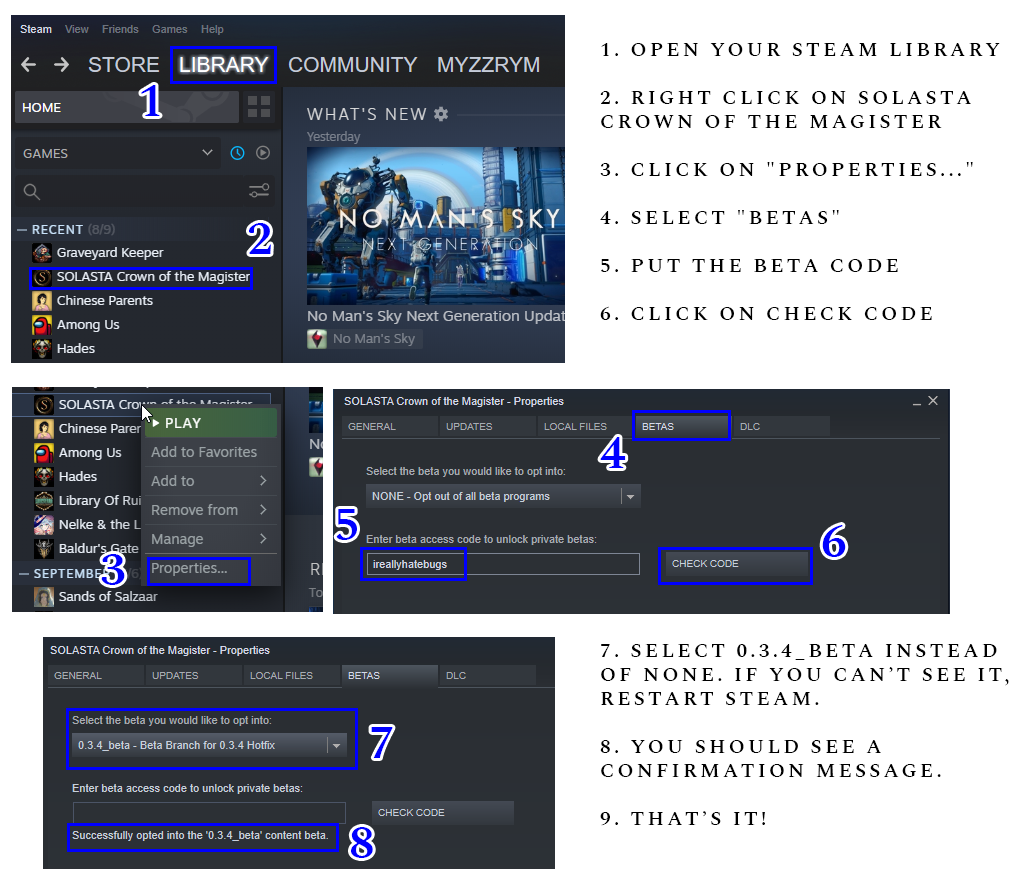 Note: If you're running into infinite loading screens, make sure you read the following thread https://forums.solasta-game.com/forum/data-corruption-what-to-do-if-youre-stuck-in-infinite-loading-screens

This will be the last patch before switching our entire focus to the next big update, which will drop this winter season! We'll have to ask you all to be a bit patient until then, as we won't be delivering any updates until then - every small patch we make delays the larger one, and we know you're all waiting for more content from us, not just fixes. We will go into more details as to what this big Winter Update contains, but let me already tell you that there will be new quests, more customization and the Rogue's Hide action among other things!

Welcome to Solasta's Winter Update! With the addition of the new Monastery Questline, the Early Access should now reach 12h - 14h of total game time. We've also taken action regarding the most popular requests, such as adding more customization options and changing the lighting system which was deemed too punitive (we've reverted the rules back to the 5e tabletop ruleset). Hope you enjoy!

Here are a few bugs that we didn't quite catch in time to get them fixed for this update - and that we'll likely be hammering down in the upcoming hotfixes later this week. 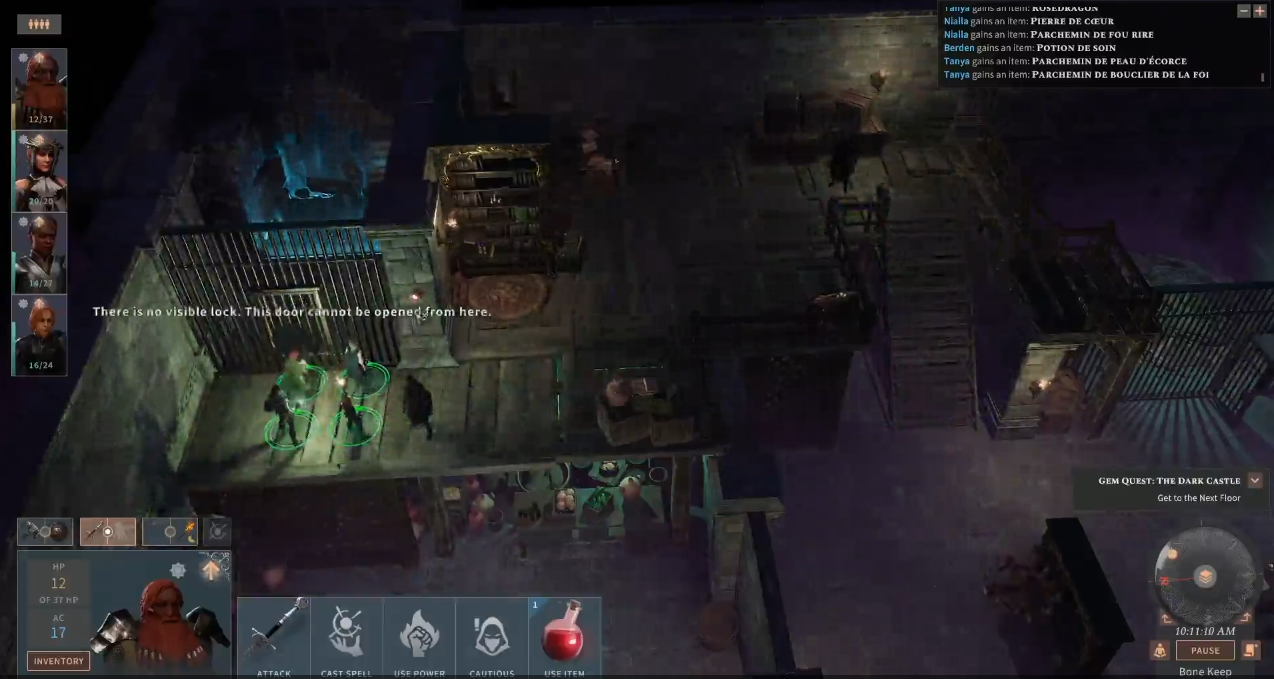 We've seen a few people concerned that the game might be getting too easy due to certain changes. As always, keep in mind that we're mostly doing those changes because we haven't implemented difficulty settings yet - so we need to make sure people who are not expert at tactical RPGs can also enjoy Solasta. Fear not however, as you will find all the challenge you wish for once we implement higher difficulty options when version 1.0 hits the store. 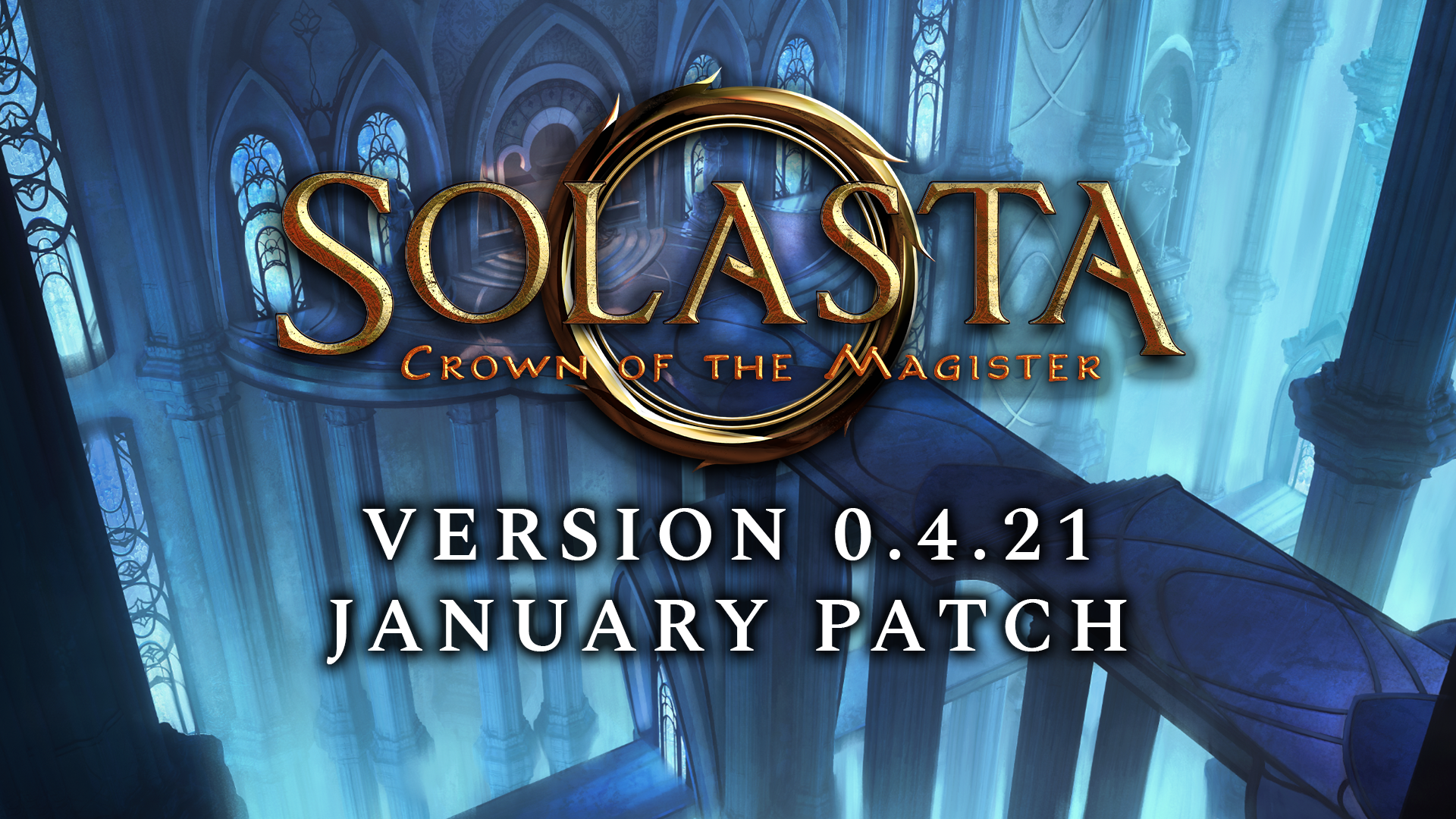 It's time for the January Patch! This small update should work out most out the bugs released with December's Winter Update, as well as a few others that thrived in our game since our Early Access came out in October. This means... it's patch note time!

But before that, say hello to Newt! She's growing so fast!

As we often see people complaining about the size of each update, I'd like to clarify once more why you're more or less re-downloading the entire game every time. Long story short, due to how Unity works (the engine Solasta is running on) we've had to make a choice between longer loading time, or bigger patch download size - and considering we're not too keen on making loading screens even longer than they already are, we've prefered to choose the latter. That's pretty much the short version of it :(

We haven't forgotten about you folks out there who would want an easier or harder experience that what Solasta is currently providing. You'll be happy to know that we've started working on difficulty settings! We've decided to offer a wide variety of options that you'll be able to customize on your own (on top of the preset you can choose from if you want to keep it simple), such as adding modifiers to attacks, saving throws and ability checks, harder AIs that use their powers more often (still limited by the tabletop rules) and target unconscious characters to finish them off, different encumbrance rules - we're even adding weighted dice for those who've prayed extra hard to the RNG gods. And that's just the tip of the iceberg, there will be more for you to play with once we're done with it!

We've already gone through two rounds of Community Suggestions, you can read our answers in the following links:

Edit: The Spring Update Hotfix has been released, you can read the changes here (mostly stability fixes).

The Spring Update should now be live, with a plethora of changes and new content! With the addition of the difficulty options, side quests and background quests, your Solastan experience is getting closer and closer to the final release. Well bugs and polish aside of course, Early Access has proved quite effective at finding and squashing them so far! But enough talk, it's time to dive into the patch notes.

Old Save Files are NOT compatible

As stated in our previous articles, due to changes in existing systems save files from previous versions will NOT be compatible with the Spring Update. That said, we're adding a lot of side content in this new update, so restarting a fresh run will give a new experience where you don't have to run after the main quest!

Note that we will put the previous version of the game (January Update) on a separate Steam branch so that you can keep playing with your old saves if you want to. And although one is never safe from a bad surprise during Early Access, save compatibility should hopefully be preserved from the Spring Update onwards.

Solasta will be discounted when the Spring Update hits the store on March 25th until March 31st, after which the price of the game will increase from $35 to $40 in anticipation of the 1.0 release. This is due to the fact that Steam prevents games from discounting within 30 days of a price increase, so we unfortunately cannot increase the price when 1.0 gets released while also having a launch discount. So if you want to jump in Solasta at Early Access price, make sure you don't miss the Spring Update sales!

The Dungeon Maker is an in-game tool available directly in the main menu which allows you to create, edit and play custom maps. The video above is a quickstart guide - if you need a more in-depth guide, it is available in our Forums over there.

You can access your custom dungeon folder by simply clicking the in-game "Browse Files" button in the Dungeon Maker menu. The folder can also be manually found there: "C:\User\[YourUserName]\AppData\LocalLow\Tactical Adventures\Solasta\UserContent\Locations". Whenever you create a map in the Dungeon Maker, the game will create a .json file containing all the information with the same name there.

For the moment we're still working on Steam Workshop Integration. In the meantime, you could always drop by good ol' NexusMod where many other mods are already available (reminder: mods are community driven, Tactical Adventures has no control over them and cannot guarantee that they work properly).

How do I play a dungeon I just downloaded?

Simply copy paste the .json file into you custom dungeon folder, that you can either access by clicking the in-game "Browse Files" button in the Dungeon Maker menu, or manually opening "C:\User\[YourUserName]\AppData\LocalLow\Tactical Adventures\Solasta\UserContent\Locations". The new dungeon should then appear in-game in the Dungeon Maker list.

I have a question about the Dungeon Maker!

Make sure you read the in-depth forum guide about the Dungeon Maker, and if you still have questions feel free to swing by our Discord server and head to the #modding channel!

Will you update for the Dungeon Maker in the future?

Of course! You might have noticed the Dungeon Maker is still lacking quite a few features, and that's because the Dungeon Maker will still be in beta when we release the full 1.0 version of Solasta (we've got to make sure we wrap up the main campaign properly first). There are tons of things we want to add later - quest systems, dialogs, merchants, more environments... Make sure you tell us what you'd like to see first!

Aside from hotfixes, we've got our sight now locked onto the final 1.0 release. Keep an eye out for more information about our official launch date!