Hey there folk! You know the drill by now, Zaz here has you covered.

Today I’d like to talk about how we use Light and Darkness as a gameplay pillar and fundamental concept in the world of Solasta.

When you think Fantasy Tabletop RPG, chances are one of the images that comes to mind is a group of adventurers exploring a dark dungeon, torch in hand, moving cautiously to avoid traps and ready to draw their weapon the moment a monster jumps out of a dimly lit corner. Infravision - and then Darkvision - allowed some specific races to be more efficient in the dark, with clear differences between Bright Light, Dim Light, Darkness and Magical Darkness.

But this has scarcely been used in video games, notably because of the many problems involved when it comes to player experience. We too had to brainstorm a lot to find how we’d use this in an interesting way: after all, micromanaging light must not become a burden. And we're pretty sure our Art Director wouldn't be very happy if all you see is a black screen the moment your characters toss their torch away. 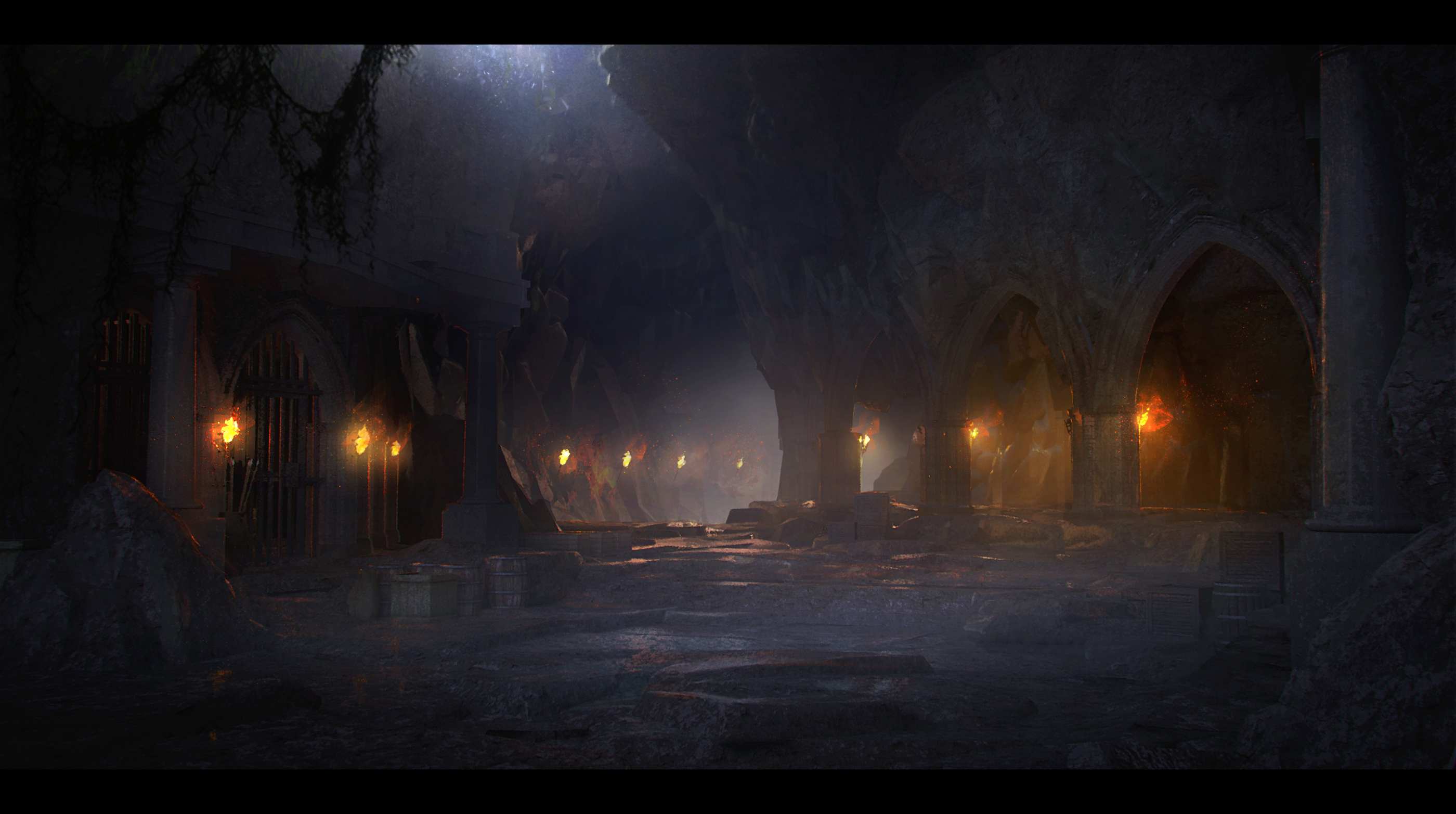 Ambient lighting is a very important part of our Level Design

To see or not to see

At the very start, we discussed about how to represent each character’s own vision. As you all know, we human beings don't see that well in darkness - but for our elves and dwarves, life at night is a nice painting in shades of grey (as to how many, no one knows for sure).

We thus tried to represent the game based on the current party leader's vision... and you’d always end-up with an elf leading the path. Not that we have anything against elves, but you have to remember that the game ends up in black and white 90% of the time as you don't see colors with Darkvision. So... we decided that what would be displayed would have to differ from what the character sees.

If you thought that was the only challenge when it comes to light, we're just getting started. Most players will already have an idea of this issue, but the difference between a character with Darkvision and one without Darkvision is huge.

If we go according to RAW (Rules as written), a character with no Darkvision can't see anything in the Darkness - so technically you shouldn't be able to see where the enemy is. If your DM isn't playing nice, you'd probably spend a few rounds just trying to find your opponent before even starting to swing at him with Disadvantage. On the other hand, a character with Darkvision treats Darkness as Dim Light - which doesn't do much aside from giving you disadvantage for Perception Rolls. You could run the entire dungeon with a group of Elves without ever busting out a torch, and probably hear our Art Director sobbing in the distance while doing so. 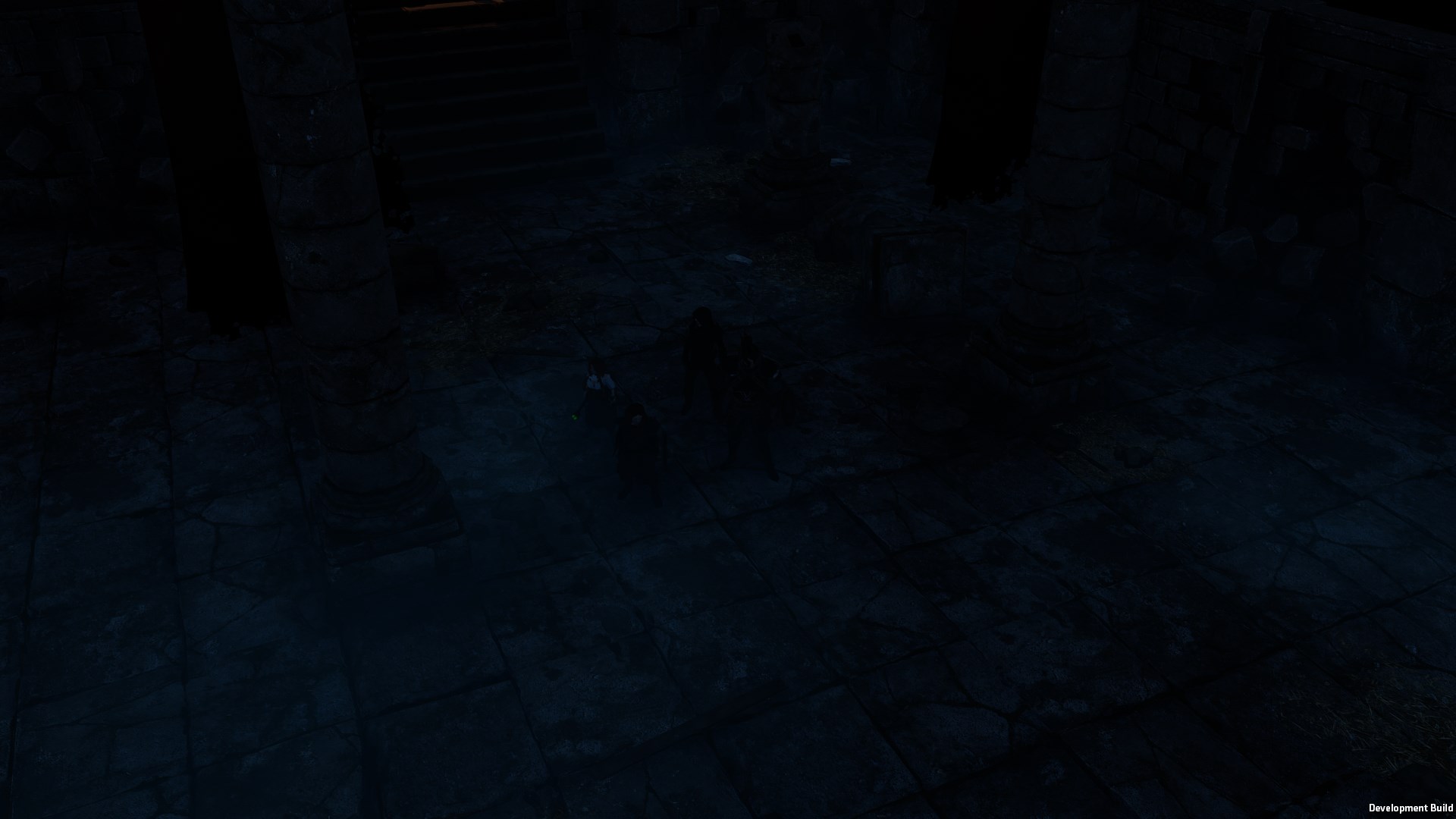 I don't know guys, running the entire dungeon in the dark doesn't seem like a fun time to me.

When we tried to emulate that in-game, it was excruciatingly frustrating - you knew an enemy was right in front of you (because your dwarf can see him), but your human would just be unable to target him because he was in the Darkness. We felt like the player would be punished for simply not having a full party with Darkvision - heavily limiting the interest of having a Character Creation Tool. Want to play Hard Mode? Just have a Human or Halfling in the party.

This is why we decided to seek a middle-ground - a way to make races without Darkvision less inept, and those with Darkvision more reliant on light. In Solasta, the Light System currently works in the following manner:

With this system, characters with Darkvision will now have Disadvantage in Darkness - meaning they'll have to start relying on Light. To balance it out, other characters will now also have Disadvantage in Dim Light - but they get to "see" in Darkness and can target enemies there. Note that Darkvision does not increase Vision Range - as explained above you'd end up with different Vision Range for different party members, adding artificial layers of complexity to party management.

During exploration, your perception will be affected by darkness - meaning you'd better have some source of light at hands if you want to detect those traps and secret passages. Darkvision will give you an easier time of course, but you shouldn't forget the rest of the crew - who could very well notice something your Elf / Dwarf missed in the first place.

You'll quickly realize that this is twice as important in battle, as it will affect your accuracy. To keep it simple for the players, in our current system you can see if your opponents are in Bright Light / Dim Light / Darkness by hovering over them, and the cursor model will change to tell you if you'll roll with advantage or disadvantage (or simply normally). Want your Warrior to have his Shield in hand? Better make sure your Wizard has a Light Cantrip for him. By putting a heavy emphasis on Light, it adds a tactical layer to Combat Sequences - using the environment such as glowing stones, braziers or pools of flammable oil to light up your enemies, or rushing in torch in hand so your archer can pick off your enemies from afar. Want to hold a narrow corridor and only your Warrior is still up? Drop your torch on the ground, take out your shield and stand your ground! 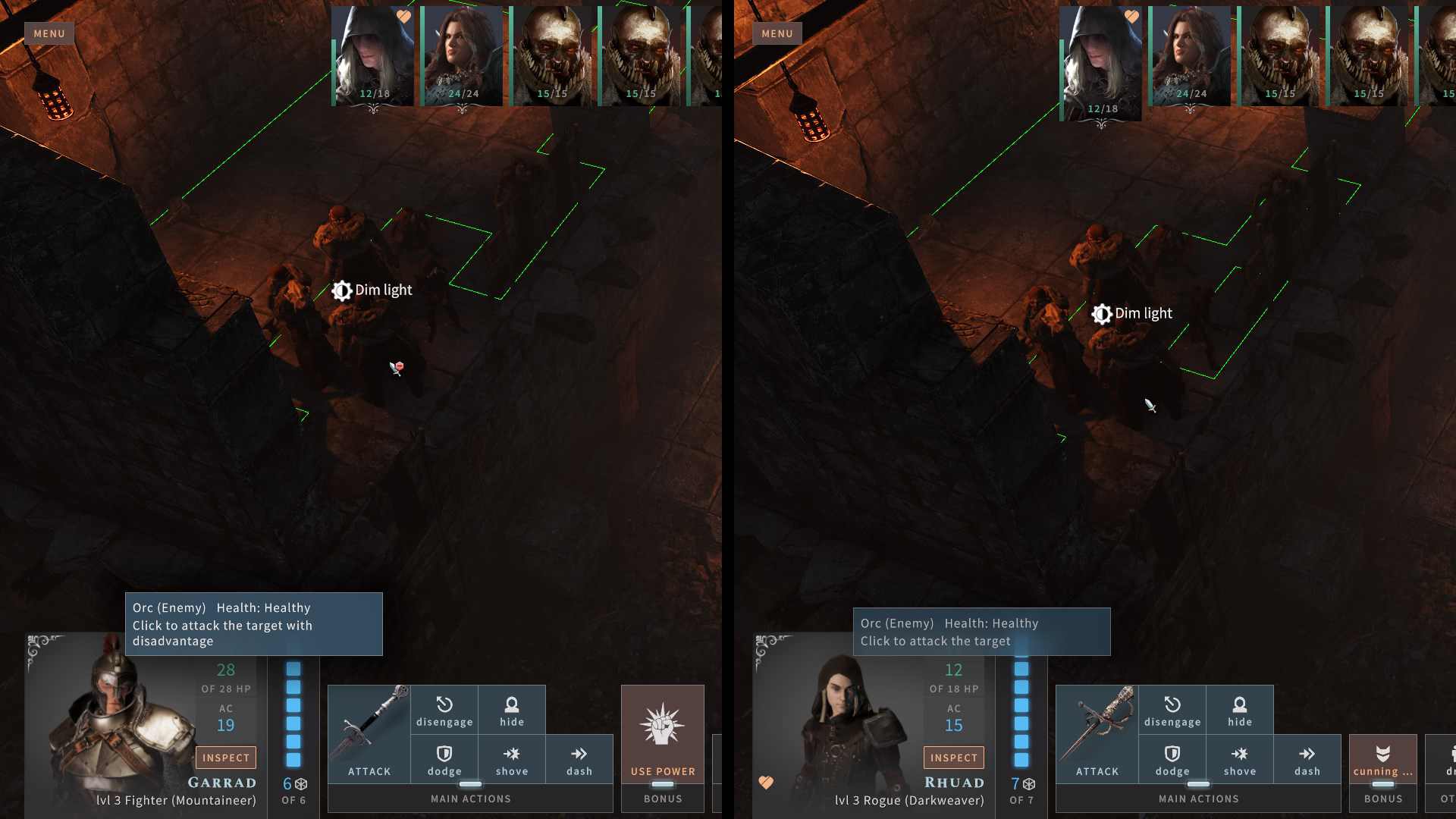 Same situation, Human Character has Disadvantage because of Dim Light Conditions, Elf Character does not.

Light as a weapon

Now, it wouldn't be very fair if Light only affected our party. This Gameplay Pillar is called "Light & Darkness", not just "Light" - there is a duality that we want to explore. While adventurers may have issues with pitch black dungeons, the opposite applies to creatures born deep underground, perfectly adapted to the Darkness with Superior Darkvision, Blindsense or even Tremorsense. These creatures will very likely not appreciate having a torch shoved into their face, and some of them will be Sensitive or even Hypersensitive to Light - making it not only a resource to manage, but a deadly weapon too.

Imagine your party of four facing numerous creatures many time their size, kept in check by the light they wield - it’s both epic and terrifying, and this is what we want Solasta to be about. Back from your quest, you’ll enjoy the fresh air and sunlight, only to rest for your next raid underground… and into darkness.

This is perfect! Yes I agree that light should be more of a factor in an RPG, but at the same time I don't want to have to play my game peering into the screen trying to figure out what's what. Playing video games is a strain on one's eyes under the best of circumstances. No need to make it any worse, and especially for those of us older gamers. Separating out what the player sees versus what the characters see is exactly the right way to go.

I would say that your choice is excellent. If you also add sensitivity to light to opponents base spells like "light" can really be used as lethal weapons for certain enemies. I look forward to seeing the lighting system in action. If I have not misunderstood therefore every single light will be managed independently and will have weight in the game something that I have never seen in other games compliments.

I like how you implemented the light and darkness system in Solasta.  It causes me to make immersive decisions for my characters that are also good mechanically.  I was torn between having my fighter equip a shield in his offhand for better protection or carry a torch.  I decided on the torch.

My only feedback would be that it was not obvious to me why my characters were disadvantaged when attacking some of the spiders.  At first, I thought it was because of obstructed line of sight (LOS).  Eventually, it dawned on me that it was probably because of the light mechanics.

As part of that feedback, I would say that which spaces are under light, dim light, or darkness need to be much clearer to the player.  I couldn't tell where any of the lines were, so to speak.  The space my characters were fighting in looked bright enough which is why it wasn't immediately obvious that their disadvantage was due to dim light.  How close to the bonfires do I need to be?  What is the light radius of a torch?  These need to be more distinct and visible to the player in the game.