Most of all RPG / Tactical games I enjoy, my favorite part of them is collecting awesome looking gear! Making my character uniquely customizable plays into the fantasy of the game and knowing that that character is uniquely yours. Here are the major pain points I always come across.

For starters yes, beginner gear always looks shabby! But this is not a pain point and I am all for that!

1. Progressing through a game, armor sets can sometimes be overcomplicated and sometimes impossible to collect.

2. Gear sets can be beautiful, and by progression, they become outdated as you level up, by finding new powerful gear to replace them with. Making them obsolete.

3. Allow my Cleric to wear Mage robes if I feel like it!

1. - COMBINED ARMOR SETS. Creat combined armor sets that are a singular visual piece. CAN'T TAKE THEM APART EXCEPT THE HEAD. So when I apply it on my character is doesn't take me weeks or months to complete the entire armor set. And my character doesn't look like it went shopping at a 2nd hand thrift store. At the beginning of the game - make a couple of beginner armor sets look ugly, but I don't want to be LV 40 looking like garbage, cause my pieces are impossible to collect. I BET YOU THIS TACTIC WOULD SHAVE OFF MONTHS OF WORK!

2.A - STAT SQUISH ARMOR, WEAPONS & OFFHANDS. Create the armor sets with the same or similar stats of that armor type. Just because I am level 1 - does not mean I would not FIT an armor set that came from a level 80 end game dungeon. Allow people to mix different the types Armor Sets, Weapons & Offhands, by making them unique.

2.B - CREATE EMPTY SLOTS TO UPGRADE ARMOR, WEAPONS & OFFHANDS. So this would be gemmed/jewels, stones you collect through progression. So if my Level 50 Character loves the look of a beginner typer armor, my gems/jewels and stones would bring my stats up to my current LV 50.

2.D - CREATE NON VISUAL SLOTS TO BRING UP STATS. Rings, neck, waist, arms, wrist, hands, legs, feet. Make those material specific as well. So my mage is not running around with plate boots.

2.E - CREATE THE SAME EMPTY SLOTS FOR EVERY ARMOR, WEAPON & OFFHAND. So when I do level up to End Game - but I wanna use my weapon from my LV 20 campaign because they look great together, allow for that option.

This is a ROUGH IDEA, but I think it would allow for that extra layer of customization that people look for in games. I think the slot idea in exchange for all that extra work for visuals work might pay off in the long run. But I have no clue because I am not a programmer. 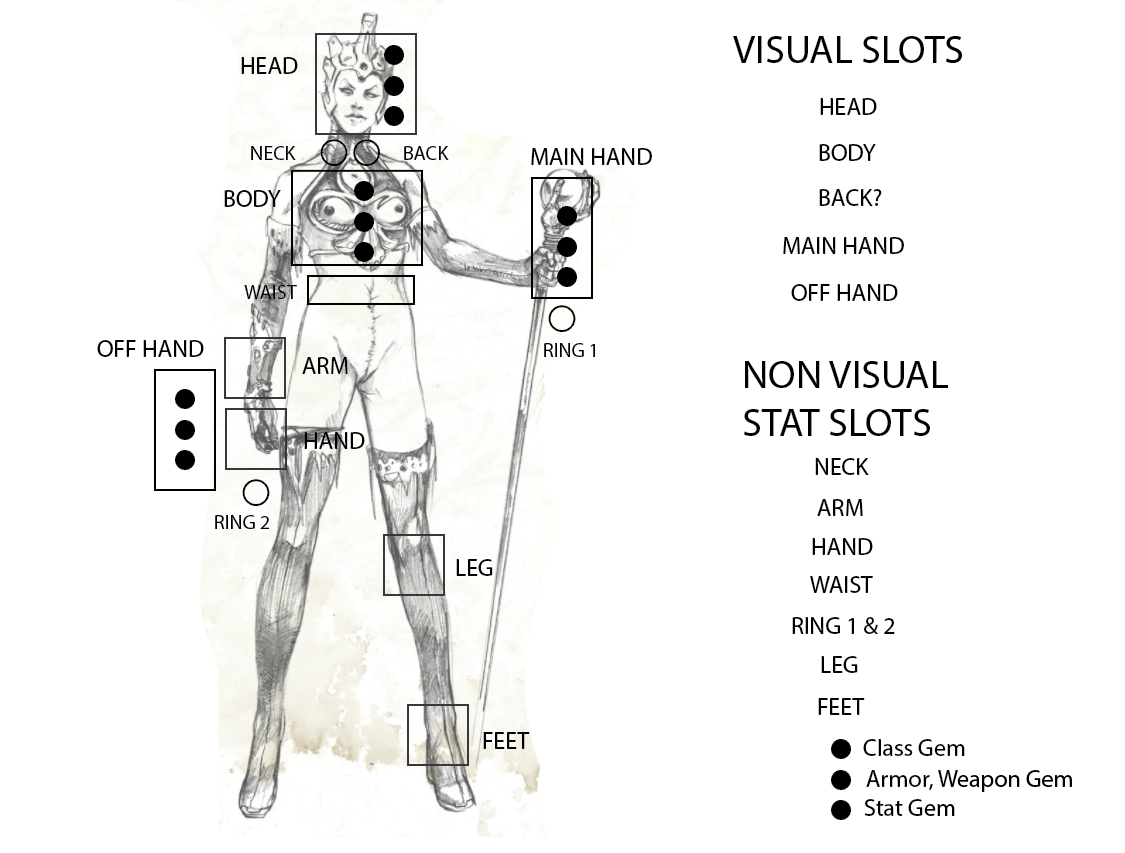 There is no light without shadow...

For the bracers, gloves and boots you can't have one of "this" and an other one of "that". For exemple you cannot have a glove of "ogre power" and a glove of "missile snaring" equipped in the same time. In DD5 if you want to use the magic power of an object you have to wear it completely (so you have to wear both of the same bracers, gloves or boots).
It is not really explain for armor but this is the same concept. If you wear a mithral armor you have to wear it completely to gain the features of that armor. With the DD5 rules there is no possibility of wearing some part of an armor and other part of another armor, it is impossible to understand the bonus on the armor class in that way.
To give an example a leather armor raise your AC from 10 to 11. But if you get 3 different pieces from different armor how do you calculate it? so leather armor is giving 0.33 bonus AC? It can't work with DD5 system.

Solasta is great for DD5 players, developers are trying to make a game the more close to DD5 rules. In that way there is no such thing as "level" for items. You don't find a "level 7 sword" it doesn't exist. if you find a magic sword then you can use it. Some magic weapons have magical restriction but this is really rare.